The programme was guided by Fr. Rappai Poothokaren SJ. He led the participants to open their hearts and minds to the nature & enlightened and inspired through various prayer methods. There were 44 participants, including priests and sisters and lay people.

Inaugural Session
On 9 th morning all the participants arrived at NBCLC and had the inaugural function. The inaugural session started by lighting of the lamp by the director of NBCLC Fr.Sagaya John, Fr. Rappai Poothokaren SJ, resource person for Eco Spirituality Retreat, Sr. Kamala SAB, Superior General St Anne’s of Bangalore, Fr. Titus Raphael, and Mrs. DeepthyMenon while Sr. Kusuma sang a melodious Bhajan to invoke the presence of God . The word of God was read by Deacon Francis and Prayer was initiated by Fr.Peter Swammy. In the Inaugural talk Fr. Sagaya John explained to us the origin and mission of NBCLC and its function and the various programs that are conducted in the centre.Fr.Sampath Informed the Group that in order to facilitate the activities of the group, it is good to have a group leader and Sr Sheela Nicholas SAB was proposed to be the Group Leader. The participants were divided into four groups, the group Leaders were Fr . Xavier Durai Raj, Fr. Titus Raphel, Fr. Jerald Varghese and Sr. Philomina Mathew SAB. The groups Organised and animated the morning prayers and Liturgy every day in a very creative way in tune with the nature and gospel which was great inspiration for all.

Theme of the retreat: "A holiday with God in Nature".
At the outset Fr.Rappai Poothokaren SJ, the retreat Preacher enlightened the group what it means to be in a holiday with the lord in nature. He illustrated what a holiday is and what goes against a holiday .There are several ways of looking at a Retreat and explained on Tagore’s Summer Song in Gitanjali, he led the group to an experience of Eco Spirituality and Eco conversion. The group was asked to look at Lord’s Supper: from a ritual towards a celebration.He enlightened the group on Eco Education, Green students and inspired to Plant trees, save the earth. He also spoke about how to be Green Teachers. And invited the group to reflect on the Mosquito paradigm, Global warming leads to Climate Change! Then continued with Electricity is the biggest pollutant in our times also narrated about CFL bulb campaign. The session on ecology from the perspective of Bible. With the help of power points he brought out various examples from the Old Testament and the New Testament which speak about creation and other related subjects on ecology.

Some of the themes dealt during the sessions were as follows:
1. How does God view the whole creation and us?
2. Eco-spirituality in the tradition of the Catholic Church
3. Creation is the primary book of God’s Creation
4. Traditional contemporary Christian history – on eco spirituality
5. Few living thinkers of today and their view on ecology
6. Indian Cosmology and Eco Spirituality
7. Old traditions of Adivasi on their belief of God and creation
8. Various religious beliefs in different levels: i. popular level (rituals and
customs); ii. Ascetical level (Commitment); iii. Mystical level (Sheer
experience)
9. Opening of eyes and seeing God every where
10. Eyes: St. Bonaventure – Body, mind and Soul
11. Need of opening 5 senses
12. God and seasons of the year: 6 seasons in India

The afternoon session: we were shown everyday a different video clips, particularly on an inspiring Adivasi Girl, Swetha, from North India who inspired and brought awareness on usage of CFL bulb in place of halogen lamp. She was a school girl and she began her noble act from home to the entire region of that particular area. Another short video was shown on “Poison plate” by Amir Khan: how chemical fertilisers and pesticides affect the lives of human beings.
Morning prayer and meditation: Fr. Rappai Sj conducted the morning meditation on 7 wonders of the world: smell, see, taste, feel, hear, laugh andlive. To understand better this wonders he asked us to move out of the hall and go through the process of smelling, seeing, etc. And after that we were called to come back to the hall and make prayers based on our experiences. Every day the liturgy group conducted the different method of meditation which helped everyone to pray better. On the last day Fr. Rappai read out a poem from Galil Zibron, and requested the participants to meditate upon.

The Eucharistic celebration: Every day evening at 6.00 PM the Holy Eucharistic celebration was celebrated. On the first day Fr. Rappai Celebrated the Holy Eucharist high lighting the five elements. On 10 th August Saturday by Fr. Sagaya John, the Director of NBCLC. The members of the I group prepared a tableau depicting the five elements of the earth which were created by God and how the humanity destroyed them by various pollution. The celebrant gave a homily on the goodness of God’s creation. Before the end of the conclusion the faithful took an oath by stretching out their right arm towards the alter and seeking God’s grace to protect the Mother earth and the entire creation. After the final blessing the members of the group I put up an action song praising God for creating me... me...,Same with the group II, III, IV prepared differently according to the theme. The group II put up a street play on save the Earth,Fr. Titus the celebrant preached on responsible stewardship. After the Mass the participants were served different items every day.

After the dinner the resource person showed a documentary film on the river Ganges part I,II,III and concluded the day with Examination of consciousness. 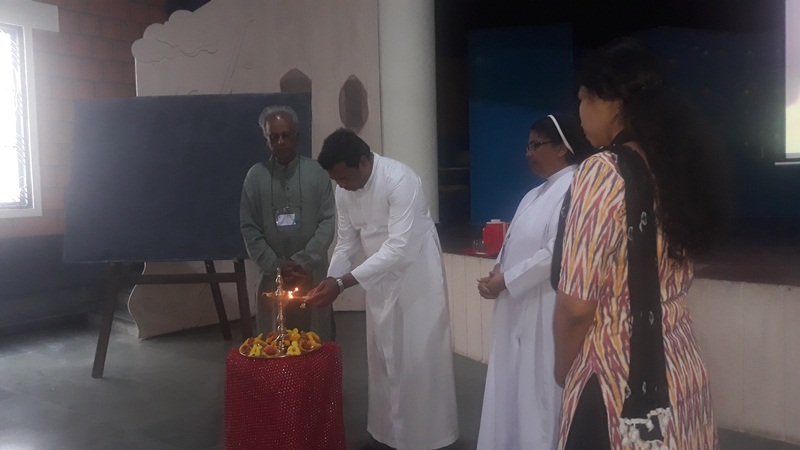 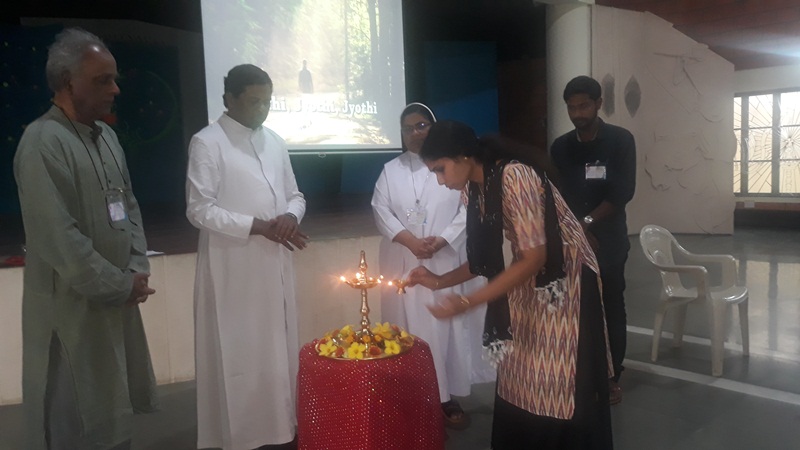 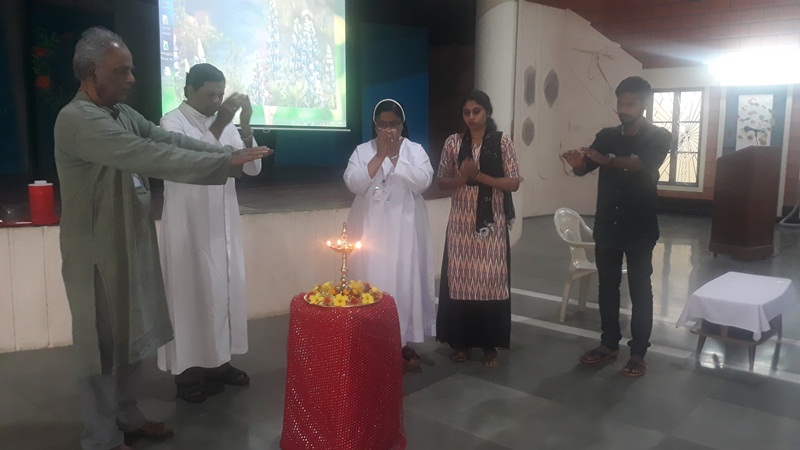 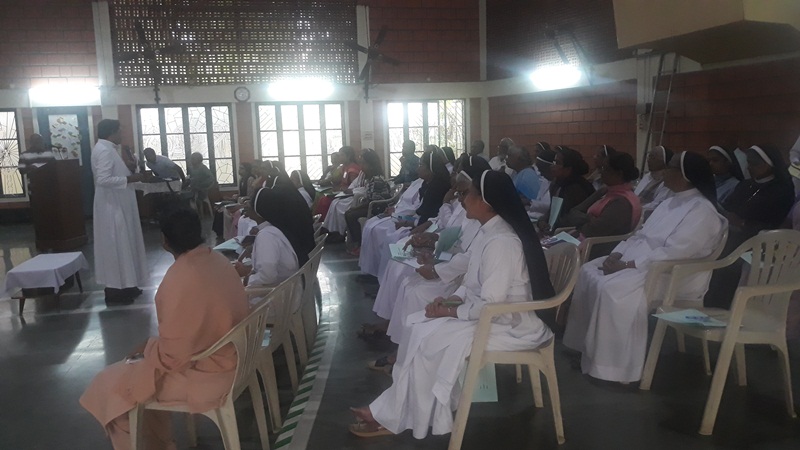 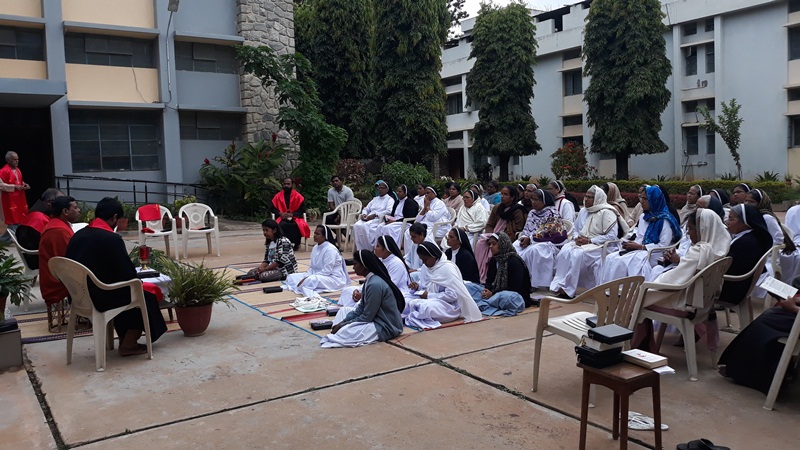 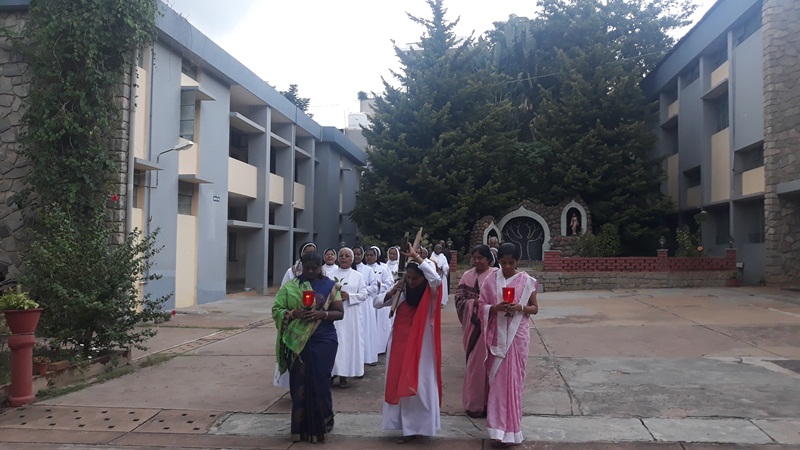 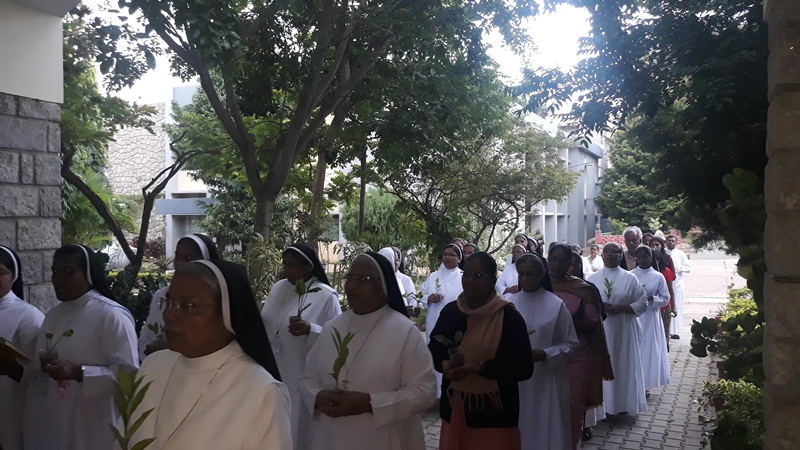 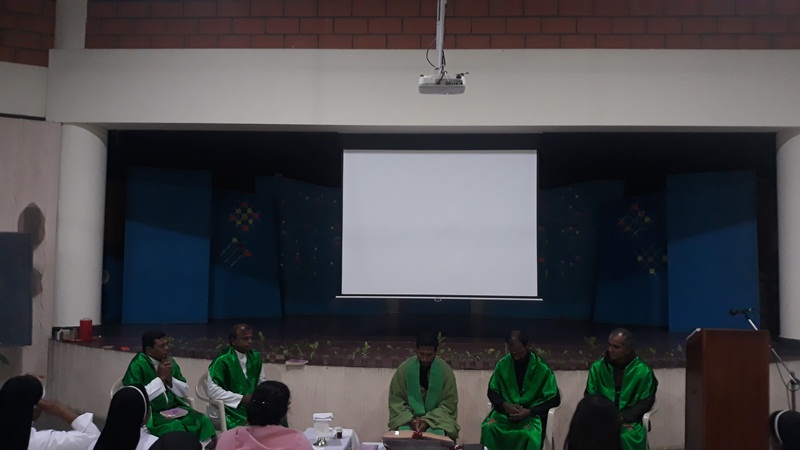 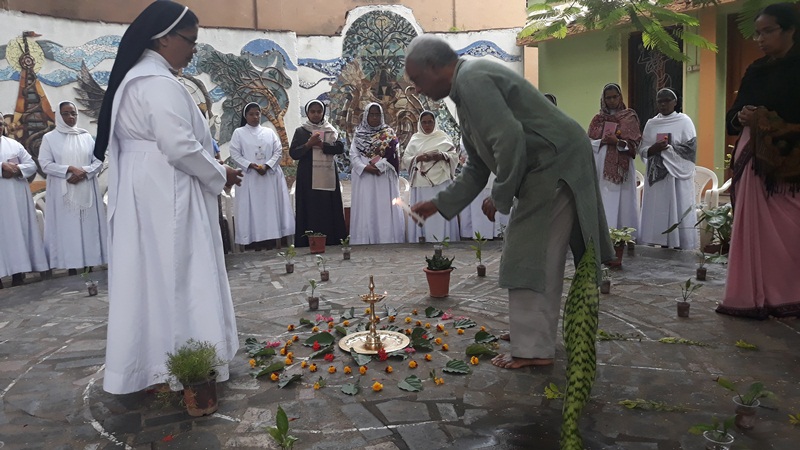 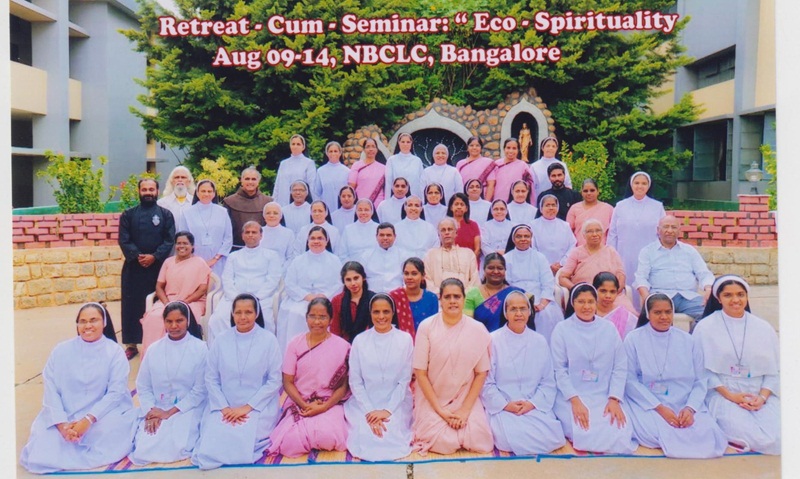 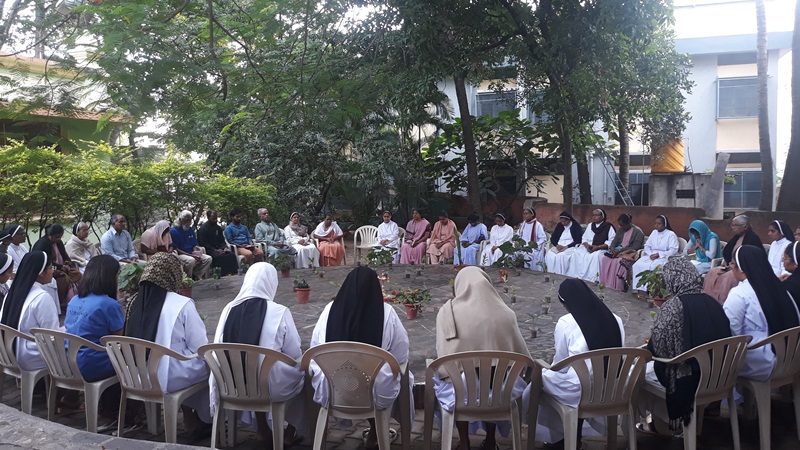 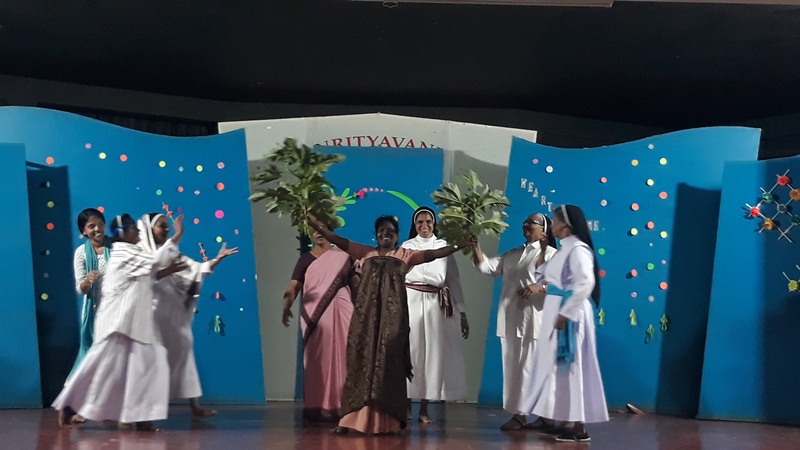 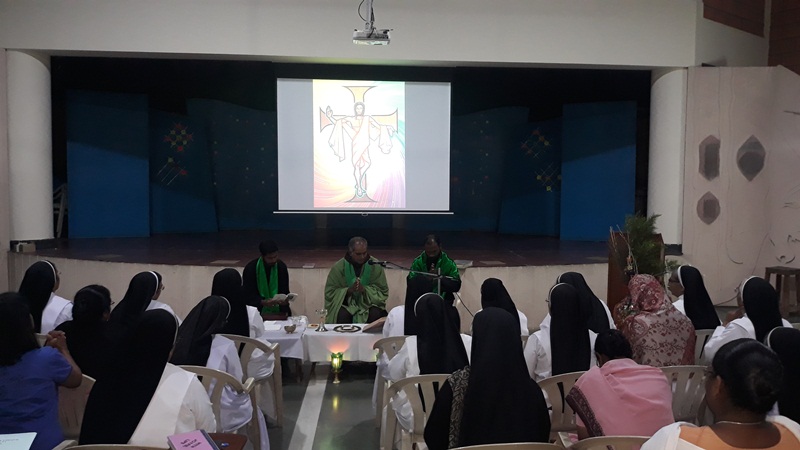 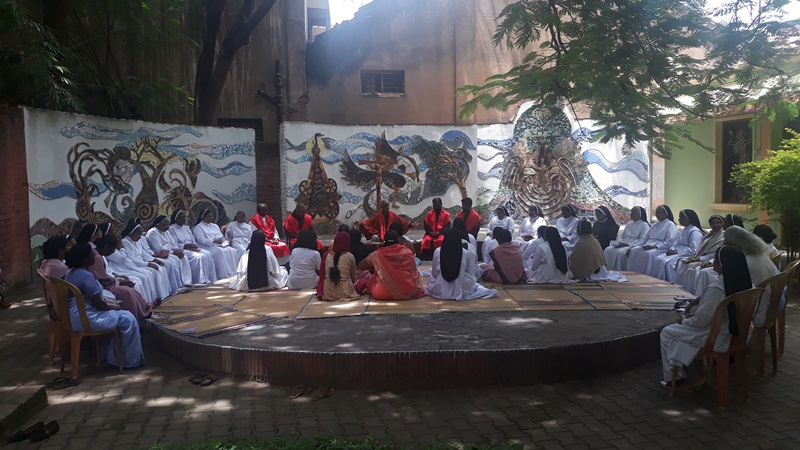 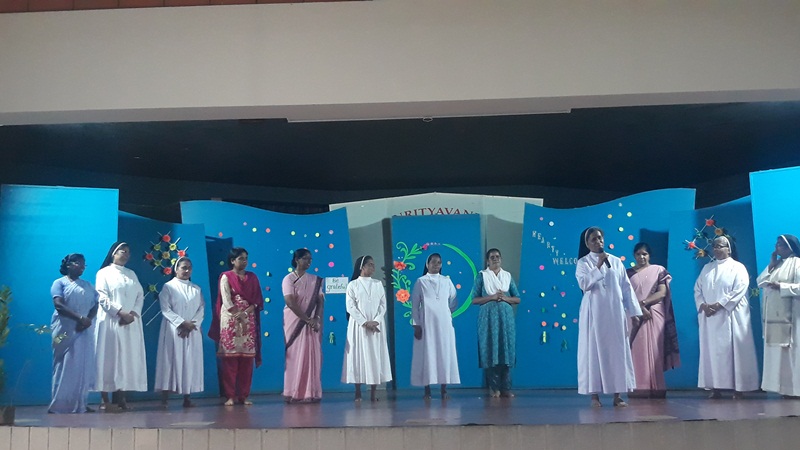 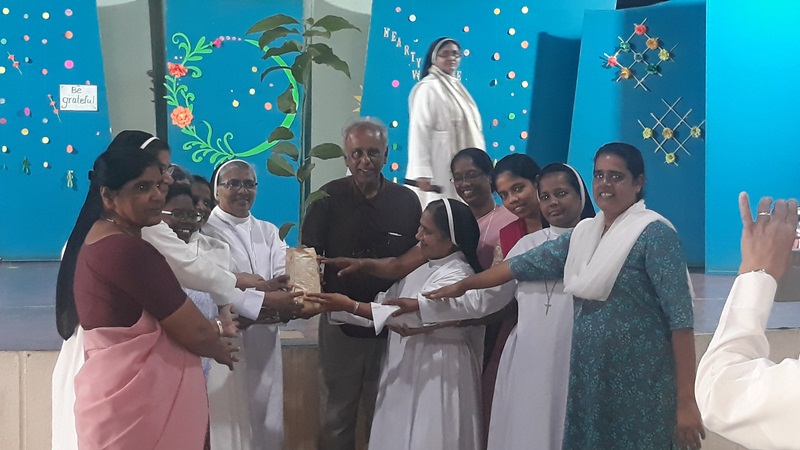 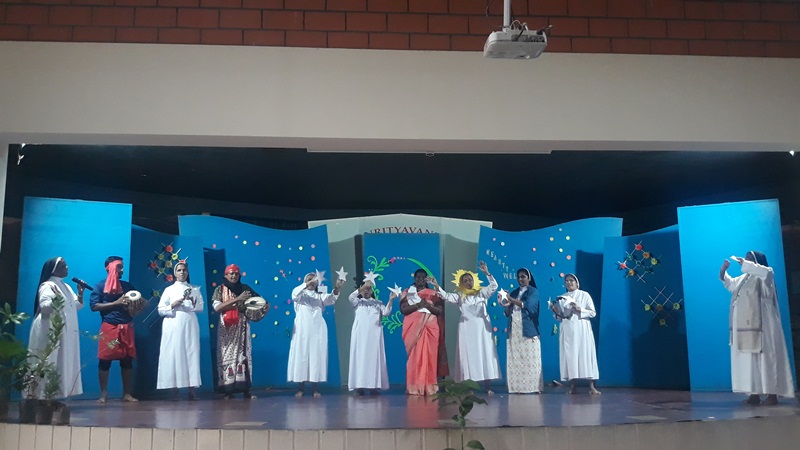 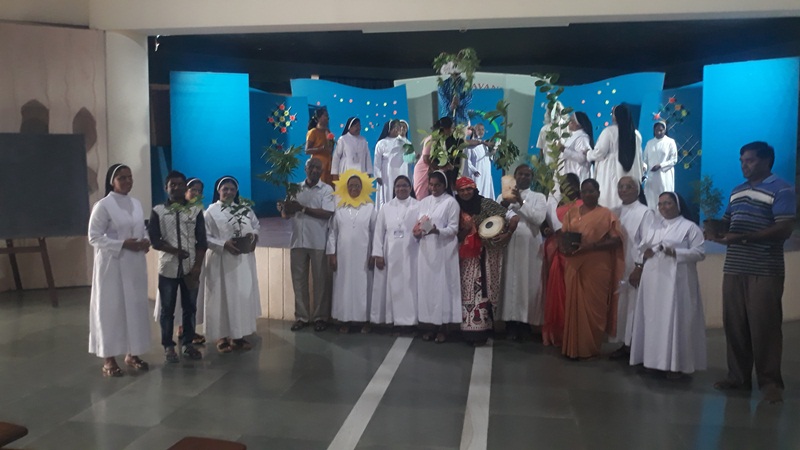 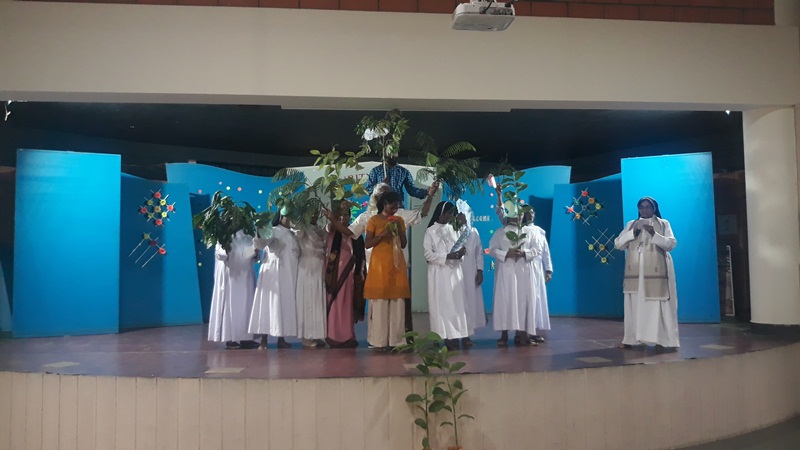