First Day
Research seminar on Biblical Interpretation in India was the fruit of the coming together of four institutions, CCBI Commission for Bible, NBCLC, CBAI and TPI, involved in the task of Biblical interpretation in India. It was organised to mark the 25th anniversary of the document “The Interpretation of Bible in the Church”. This Biblical Research Seminar was meant to present the current situation in India, with regard to applying the methods or approaches to the text of the Bible and their outcome; to study the various attempts already made on the Indian soil with regard to particular methods or approaches and to make an evaluation of the same; to show the new directions that are opened to us in the fields of Indian Biblical Studies and Biblical Pastoral Ministry.

The seminar began on 27th September 2019, at 4 pm at NBCLC, Bangalore with the arrival of various resource persons and participants from all over India. The participants included Bishops of the CCBI Commission for Bible, Chairmen of Regional Bible Commissions, Regional and Diocesan Secretaries of Bible Commissions, Members of CBAI, ITA, TPI, Professors, Priests, Research scholars and Religious men and women, Lay leaders involved in the Biblical Apostolate, as well as a group of students who were part of the Bible course in NBCLC. There were 127 people who were present.

Thereafter Presidential address was delivered by Most Rev. Antonysamy Peter Abir, Chairman of CCBI Commission for Bible. He began with the words of appreciation, and called attention to the need for political interpretation, proper theologising, and much more Biblical interpretations in India. He recalled the NBCLC’s long tradition, initiated by late Rev. Fr. D. S. Amalorpavadass to implement the teachings of Vatican II, especially in the field of Bible. He suggested, for the future, some areas of concerns and themes for discussion related to the interpretation of the Bible in India.

The Keynote address by Fr Selva Ratinam SJ, President, JDV, Pune, was very strong and verbal in presenting the reality of the Biblical Interpretation in India. His discussion revolved around the origin of the document and its reception in India. After presenting the Pontifical Biblical Commission’s document on Interpretation of the Bible in four parts, he presented the two approaches of the past in the Biblical interpretation, namely dogmatic and critical on the one side and the emergence of local alternative Methods of Biblical Interpretation on the other side. He went on to present an Exegetical Model for India with the sample of application. In conclusion, he said that for a responsible interpretation of the Bible, we need to attend to the historical (world behind the text), literary and ideological (world in the text) study of the Bible, keeping in mind the reader (the world in front of the text).

The First Paper was presented by Fr. Assisi Saldanha, C.Ss.R. His topic was “The Future of the Historical Method.” and this session was moderated by Fr. Laurence Culas. Fr. Saldanha began explaining the historical origin of the Historical Critical Method, and what does the document (Interpretation of the Bible in the Church) say about this method. He also discussed the aftermath of this method. Thus he discussed about this method in the pre-modern, modern and post-modern era.

Second Day
The second day began with the Holy Eucharist presided over by Bishop Peter Abir. After breakfast the Second session began with the paper of Fr. Joy Philip CMI, (DVK, Bangalore, the president of CBAI), on the topic, “Narrative-Rhetoric and Canonical Methods for the Interpretations of the Bible (Synchronic Approach)” and it was moderated by Most Rev. Raja Rao, Bishop of Vijayawada. The resource person explained the Narrative-Rhetoric and Canonical methods as the new literary criticism which adopts the synchronic approach. Fr. Joy asserted that what is needed is a balanced approach in understanding the relation between Pre-Text, Final Text and the Reader’s context.

The third paper was on the “Hope amidst Hopelessness: Subaltern Approaches to the Markan World” by Fr. Maria Arulraja SJ. This was moderated by Fr. Francis Xavier, Bangalore. In his edifying presentation, Fr. Arulraja brought the sitz-im-leben of the Indian Subaltern soil into a dialogical conversation with the sitz-im-leben of the Markan world. He proposed a life-centric approach for reading of the Bible from the cultural soil of the Dalits, the Fisher Folk and the Migrants.

The fourth paper was presented by Sr. Prema Vakayil, CSST, Mysore on “Feminist Biblical Scholarship - Before and After the (document) Interpretation of the Bible in the Church” and it was moderated by Fr. Prashanth, Orissa. Sr. Prema with the feminine gentleness and firmness presented her paper, first of all by clarifying the term feminism. She also affirmed quoting from the history and the document that women have played a more active role in the exegetical research. She presented growth of feminist scholarship after the publication of the document and feminist Biblical scholarship in India. In her proposals for the future, she also pointed out that feminist scholarship still has to be firmly established particularly among the Catholics, seminary curriculum and post graduate studies.

The fifth paper was by Fr Mario Mendes, Mumbai on “Pastoral Methods used in the Interpretation of the Bible”, which was moderated by Fr. Peterswamy (NBCLC, Bangalore). He spoke basing on his pastoral experience of the urban setup of Mumbai. He asserted that while scientific methodology is important to study the Bible, we need always to keep in mind the ultimate purpose of the Bible is to prayerfully reflect on the Word of God. He brought to attention the need to balance scholarly research with grassroots level of interpretation, and in this ongoing task the Bible Scholars and Pastoral Agents need to develop a synergy for effectively developing and disseminating various methods of Praying and studying the Bible.

The sixth paper was on “Inter-Textual Reading of the Bible with the Sacred Scriptures of other Indian Belief Traditions” presented by Mr Shilanand Hemraj, Bangalore. In his dynamic presentation he demonstrated how the local culture plays a role in the interpretation of the Bible. He showed with examples how the Bible was already inter-textual and how it is similar with other scriptural texts of India. For example Dharma, truth and love are present in all religions and there should be collision of streams coming together and pave the way for mutual conversion with each other. This session was moderated by Fr Victor, sdb, Chennai.

Third Day
The third day, 30th September, began with the Eucharist celebrated by Most Rev. Raja Rao, Member Bishop of the Commission.

Fr Samuel Kapani from Northeast of India presented the eighth paper on “Tribal Reading and Methods used for the Interpretation of the Bible” moderated by Rev. Fr. Lui of Pune. Fr Samuel began his presentation giving a brief sketch of his tribal background in which the momentum of tribal readership of the Bible picked up gradually and is maturing slowly but resolutely. Within the tribal context of northeast India, he brought out three level of interpreting the Bible which already exists – at the rudimentary level where the reader interprets the Bible in his or her own way; second level of interpretation is done by a tribal who knows well his own traditional myths at the background; in the third level, one who knows the traditions and is trained in biblical languages, interprets the Bible, discovering the context behind every expression of the Bible, is guided by his own customs and traditions and his / her Christian faith. However the tribal Hermeneutics in the interpretation of the Bible, encouraged at this stage of nascent stage of being nourished by Christian faith is gradually leading the tribal Christian to an adult stage. This would take them to the fourth level of tribal reading of the Bible that is versatility in both the Biblical and tribal cultures. He also exposed the evolution of the fifth level of the tribal reading of the Bible that took into consideration the Western, Asian and Indian biblical hermeneutics. With the example of the book of Genesis, he also noted that a true tribal hermeneutics will not be possible if some parts of the Bible is taken literally.

After the Tea break there was the Panel Discussion on “New Avenues and Future Orientations for the Interpretation of the Bible in India”. The discussion was moderated by Fr. A. John Baptist, CCBI Commission for the Bible. The three Panellists were Fr. Yesu Karunanidi, Sr. Virginia Rajakumari, Mr. Nigel Fernandes. Fr. Yesu Karunanidhi, presented his talk from the background of LGBT. The paper of Sr Virginia Rajakumari, SAB was presented by Fr Lawrence Calus. She in her short paper evaluated the present scenario in Biblical Interpretation and proposed some ways of improving it. Mr Nigel Fernandes presented his paper from a Laity and Publisher Perspective. He narrated about his experience in the field of Biblical Apostolate, his close association in preparation of two most recent Catholic Biblical translations (NLT and ESV-CE) and at present in the preparation of English Lectionary. There was some time for interaction with the panellists.

The concluding session was filled with the note of gratitude, feedbacks and suggestions for the future. Many appreciated the joint venture and networking of the four institutions.

There were some suggestions:
To make available the bibliographies of Indian Biblical Scholars for the future Biblical Mission.

To bridge the gap between the Biblical Scholarship and Biblical Pastoral Ministry.

The organisers were asked to send a write-up of this research seminar to the Pontifical Biblical Commission.

The Biblical Ministries done in India can be published as complimentary elements of this seminar.

To encourage the Laity to challenge the scholar and demand the right and needed interpretation of the Bible, like the South American experience.

Fr. Sagaya John at the end proposed the vote of thanks. Fr. Joy Philip thanked Fr. Sagaya John, the Director of NBCLC and its staff members for their hard work and the hospitality. Bishop Raja Rao said the final prayer and blessed the participants. The participants departed to their respective places after the lunch. 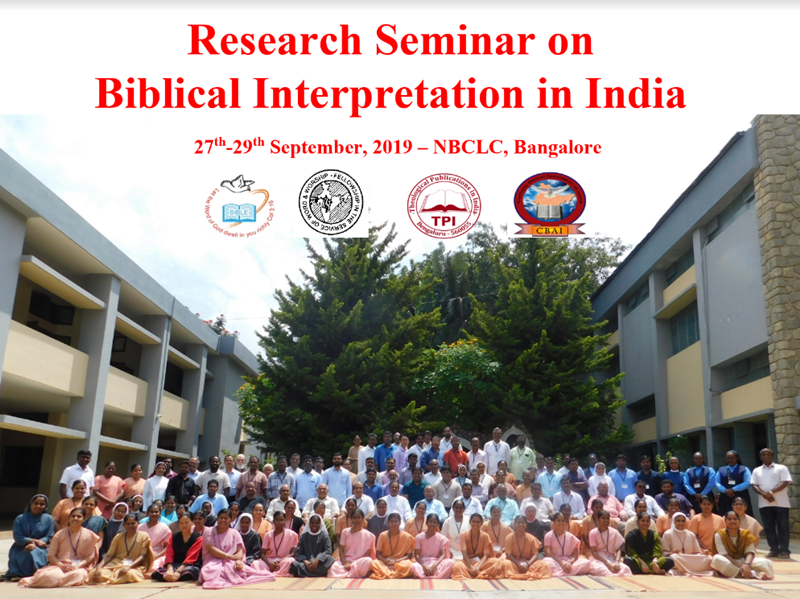